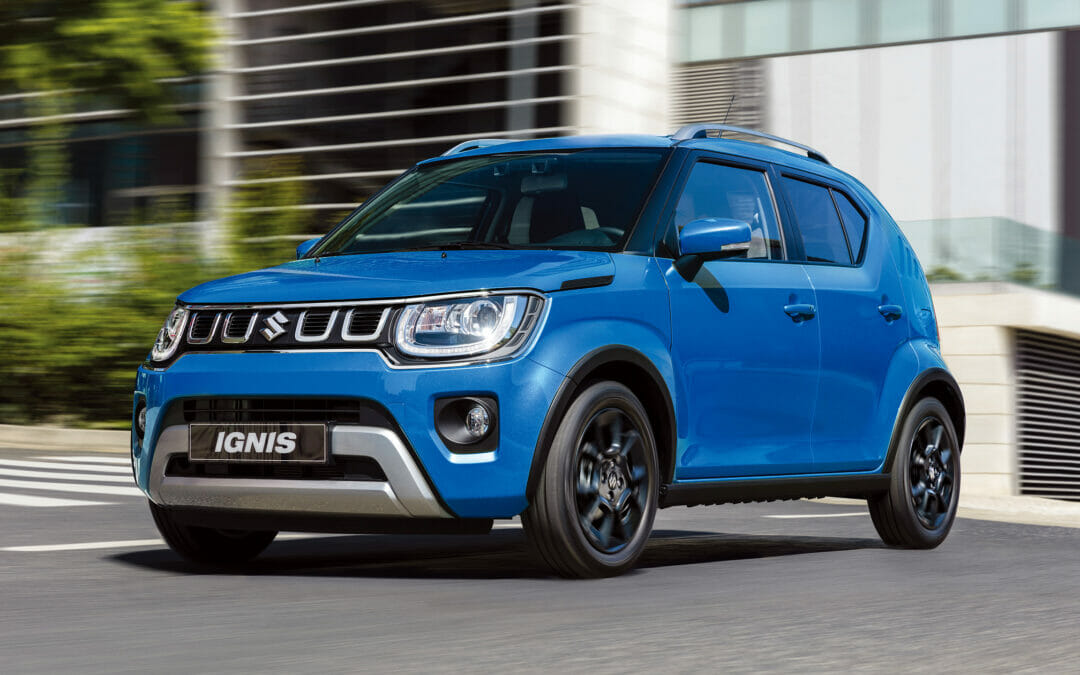 The Suzuki Ignis is a boxy car that inherits many aesthetic traits from SUVs and packs it in the dimension of a small hatchback. It has flared wheel arches, roof rails, and a jacked-up stance, giving it a rugged look. It also gets an ALLGRIP AWD system which is exclusive to the European market.

The 2021 model gets an updated front facia and several minor changes to various components. It retains the same basic design that many have grown to love over the years. The grills on the C Pillar and the upswept windows are some of the identifiable characteristics that were borrowed from the cars of yesteryear, such as the Suzuki Fronte from the ‘70s.

Cheap and flimsy interior
AWD and hybrid versions are not available for the Australian market
Misses out on safety features such as Automatic Emergency Braking (AEB) and lane keep assist.

It provides a decent amount of power, and the engine is responsive. The ride is comfortable and stable for the most part.

The engine produces an ample amount of power throughout the entire powerband. It is very responsive to the throttle inputs, so it is fun to drive around. It has plenty of torque, especially at the lower RPMs, so you will not have to constantly shift to find the right gear. It has a curb weight of just 865 kg, which results in a power-to-weight ratio of 76.3 kW/tonne, which is pretty good.

The 1.2-liter DUALJET engine has four cylinders and is naturally aspirated. It produces 66 kW (88.5 hp) @6,000 rpm and 120 Nm of torque at @4,400 rpm. It is paired with either a five-speed manual gearbox or a Continuously Variable Transmission (CVT).

The suspension is quite soft, which makes for a comfortable ride. It soaks up most bumps and potholes with relative ease and remains planted and stable even at highway speeds. Due to the short wheelbase of the Ignis, bigger potholes and rough patches on the road can unsettle the car, and it reverberates throughout the interior.

Handling is not a stronghold of the Suzuki Ignis, but precise handling is not one of the priorities in this segment either. It is pretty average, and it delivers what you can reasonably expect from a car in this segment. The soft suspension and the tall body does not help with this either. There is a significant amount of body roll through corners, so it is better to tackle them at low speeds.

The steering is very light, making it easier to maneuver the car at slow speeds. But the steering feels inconsistently weighted at higher speeds, making it a bit numb and unresponsive. The 175 section tires might seem a bit skinny, but they provide a respectable amount of grip. The car has one of the smallest exterior dimensions in the market, so it is very easy to squeeze through narrow roads and park in tight spots.

Suzuki’s K12C engine used in the Ignis is nearing its tenth year in production, and it has had a few massive leaps in terms of refinement and build quality. There are no significant vibrations at the lower revs, but the engine produces some vibrations at the higher revs. It is to be expected as it is not designed to hold such RPMs for long times.

The suspension does a very good job of soaking up most bumps and potholes keeping the car nice and stable. But since it has a short wheelbase and relatively small and low profile tires, some vibration does get inside the cabin. The cabin could have received a bit more insulation, but overall, it is a decent experience.

The ride quality is fairly decent for the most part. At highway speeds, the road noise is well insulated, but there is a lot of wind noise.

The 2021 Suzuki Ignis does not have an official ANCAP rating as it has never been tested. The 2016 Series 1 model without AEB scored three out of five stars in the Euro NCAP tests, so that is the most relevant data available.

Both the trims are equipped with six airbags, two at the front, two at the sides, and two curtain airbags as standard.

Some of the most notable features are:

It misses out on several key safety features such as lane keep assist, lane departure warning, blind-spot monitor, adaptive cruise control, or parking sensors, which are offered in many of the rivals.

The base GL variant gets halogen headlights. The LED projector headlights with LED DRLs provided in the GLX variant are much preferred over the halogen ones. It has excellent illumination even with a low beam. The auto on/off feature is also very convenient. Front fog lights are equipped in both variants as standard.

Traction control of Ignis ensures that proper traction is maintained between the tires of the vehicle and the road. It keeps the wheels well-grounded, so you won’t feel like you’re losing grip.

Suzuki puts a lot of importance on making their cars lightweight and highly efficient. The Ignis is no different and returns a very good fuel economy.

The 2021 Suzuki Ignis is equipped with a 1242 cc 1.2-liter naturally aspirated four-cylinder engine.

The Ignis is a frugal and small vehicle with a real-world fuel economy of 5.5 – 5.9-liters per 100 km. It is quite commendable for such a powerful naturally aspirated four-cylinder engine.

The 32-liter tank gives it an effective range of around 550 – 600 km before needing to refill.

The interior in the Ignis is a bit disappointing. Most of the components are made of cheap plastics, and the build quality is not great either.

But the plastic used is very durable, and it will last a long time. The utilitarian interior will be very easy to clean and maintain if you get pet hair or mud into the interior. It is a practical choice if you are going to encounter such problems.

The driving seat has a tall and commanding position which inspires a lot of confidence in the driver. The height can be adjusted manually to suit your requirements. The lumbar support is not adjustable, but it is adequate. It could have used some side support to hold you in place through turns.

The dashboard is very basic and utilitarian. All of the controls are neatly laid out, and it is easily accessible. Both the variants are equipped with Suzuki’s 7-inch touchscreen infotainment. It is a low-resolution screen and not a particularly responsive one either. It has Apple CarPlay and Android Auto.

The controls for the AC placed below are manual for the base variant and digital for the GLX variant. There is a 12V socket and a USB port under that. The instrument cluster has an analog speedometer and tachometer, and an LCD for other purposes. There are buttons on the steering wheel that can be used to control media.

All the seats are covered in a soft fabric, and it is comfortable. The rear bench seats have a 60:40 split in the GL variant, and the GLX variant has two individual seats with a 50:50. There are a lot of storage areas in the door and between the passenger seats.

With the rear seat up, there is 271-liters of space in the trunk, which increases to 516 when the seat is folded down. The cargo space is very good for a car in this segment.

The vehicle is available within an affordable price range, and there are two trim levels to choose from.

AWD is available only in the European market and not in the models sold in Australia. It is only available in the FWD layout.

Suzuki offers a five-year unlimited kilometer warranty and roadside assistance. The service cost for the first five years is capped from $239 to $329.

It can comfortably seat four seats while having decent cargo space and offers excellent fuel efficiency. The Suzuki Ignis is a perfect car for someone looking for a practical small SUV to drive around town and do some shopping.

Are Bigger Cars Safer than Smaller Ones? Myth Busted [2022]

Overview It’s been a long debate whether bigger cars are safer than smaller ones. With over...