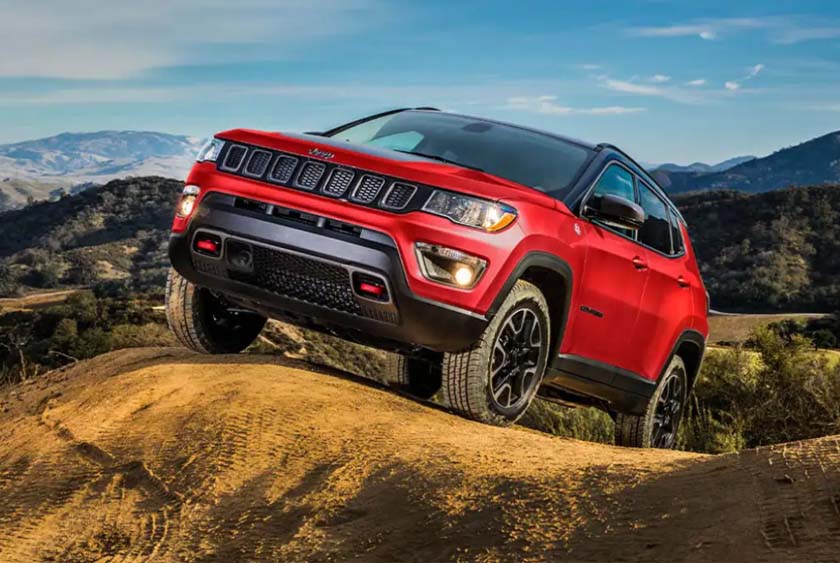 The Jeep Compass has been in the market for some time, and it has earned a laudable reputation over the years. Still unmistakably Jeep with the seven-slot grille upfront, it looks like a mini Grand-Cherokee. It has a lot going in the looks department, but the four-cylinder engine under the hood feels a bit sluggish.

The Compass brings some off-road prowess to the table but lacks in several other categories like refinement and handling when compared to rivals such as the Honda CR-V and Mazda CX-5, which is ultimately what most folks who purchase a compact SUV would prioritize.

Off-road capability.
Jeep infotainment system.
It is equipped with a generous amount of features as standard.

The engine is underpowered.
Handling is not great, and there is significant body roll through corners.
The interior materials feel a bit cheap compared to rivals.

Even though engine and performance are not Compass’ strongest attributes, it is a comfortable car to drive daily.

The four-cylinder engine under the hood feels dull in most situations. If you opt for the four-wheel-drive variants, you will get the 9-speed automatic transmission. This gearbox is quite slick, but it doesn’t offer the most responsive transmission. The shifts require some time before execution, and it can get annoying if you are used to quick shifts.

All the Front-wheel drive variants get the 6-speed automatic transmission as standard. It is similar to the ones that Toyota used to equip in their FWD cars. In the case of both the transmissions, when you put your foot down for a quick overtake, the sluggish engine combined with the slow shifts leaves you yearning for a little more power.

The suspension does a decent job of soaking up most of the imperfections on the road, including potholes. But off-road is where the Compass’s suspension shines. It will conquer terrains that the rivals do not even stand a chance.

The Compass is not a great handling car. It suffers an unnerving amount of body roll even if you are remotely aggressive through a corner. The standard tires offer a good amount of grip even under wet conditions or through rough patches of road.

The cabin is well insulated, so the vibration and wind noise inside the cabin is fairly low, even at highway speeds. But compared to rivals, the Compass’s drivetrain lacks refinement, and it could use some improvement in the NVH (Noise, Vibration, and Harshness) levels.

The ride is pretty comfortable for the most part. But it is certainly not the most comfortable car in the segment.

The Jeep compass scored good points in most of the safety tests conducted by various organizations. The Insurance Institute for Highway Safety (IIHS) gave the Compass a ‘Good’ rating on all the six crash tests. But the Compass received a ‘Poor’ rating for the illumination of the road by the standard headlights, which is the lowest rating. With the optional upgraded headlights, it received the second-lowest rating of ‘Marginal’.

The 2021 Jeep Compass has a J.D. Power rating of 81/100 for quality and reliability, which is great. It is a testament to the reliability and solid build quality.

The brakes have a good bite, and they perform well under hard braking, even in wet conditions. The brake pedal is light and progressive. There are disc-brakes in all four corners, and ABS and Brake Assist are equipped as standard.

The 2021 Compass brings a long list of safety features. Some of the most remarkable features are:

The Compass has a traction control system that works well. There are various drive modes such as Sand, Snow, and Mud which distribute the power to attain traction on various terrains. The Trailhawk trim, which has a lower final drive ratio, also has a Rock mode that locks into first gear, which directs the torque only to the tires that have traction.

The Compass returns below-average fuel efficiency considering the relatively small size of the engine. Many other rivals in the segment have far better fuel efficiency. If fuel economy is your top priority, the Jeep Compass is not for you.

The Jeep Compass is only available with a 2.4L NA inline-four-cylinder engine and it can tow up to 2000 lbs.

The interior of the Jeep Compass evokes mixed reactions. The material quality is fine given the price point, especially for the entry-level trims. But several rivals offer interiors that look far more premium and sophisticated.

The driving seat is rather comfortable. You will not have any problem doing long journeys in the Compass. The seat is eight-way power-adjustable with memory for configurations. The ratchet-style headrest is four-way adjustable. The seat is upholstered with perforated leather, which allows both heating and cooling.

A USB port, an AUX port, and a 12V socket are placed behind the leather-wrapped shifter. The steering controls are easily accessible, and the buttons feel tactile. The instrument cluster is half digital with analog speedo and tachometer. The central screen offers a good balance between ease of use and responsiveness.

Both the front seats are 6-way power adjustable and are heated and cooled. The rear seats are quite spacious, so three adults should be able to sit in the back without much hassle. There are separate AC vents for the second-row passengers.

The car is 173-inches long, 73.8-inches wide, 64.6-inches tall, and has a wheelbase of 103.8-inches. The ground clearance varies from 7.8-inches in the FWD variants, 8.2-inches in the 4WD variants, to 8.5-inches in the Trailhawk variant. The large panoramic moonroof takes up some of the headroom, but it should not be a problem.

The 2021 Jeep Compass starts at $24,495. There are seven variants at different price points with different features.

The 2021 Jeep Compass starts at $24,495. There are seven variants at different price points with different features.

All variants are equipped with Front-wheel drive (FWD) as standard. If you want to equip a Four-wheel drive (4WD), you will have to pay an additional $1,500.

The 2021 Jeep Compass is a well-rounded package that offers a lot of features, but it is not for everyone. It is not as refined as some of the rivals while some offer better space and equipment. If you require additional off-road capabilities, then go for it. Otherwise, it will be worth it to check out its rivals such as Honda CR-V, Mazda CX-30, or Toyota CH-R before making a decision.

Are Bigger Cars Safer than Smaller Ones? Myth Busted [2022]

Overview It’s been a long debate whether bigger cars are safer than smaller ones. With over...