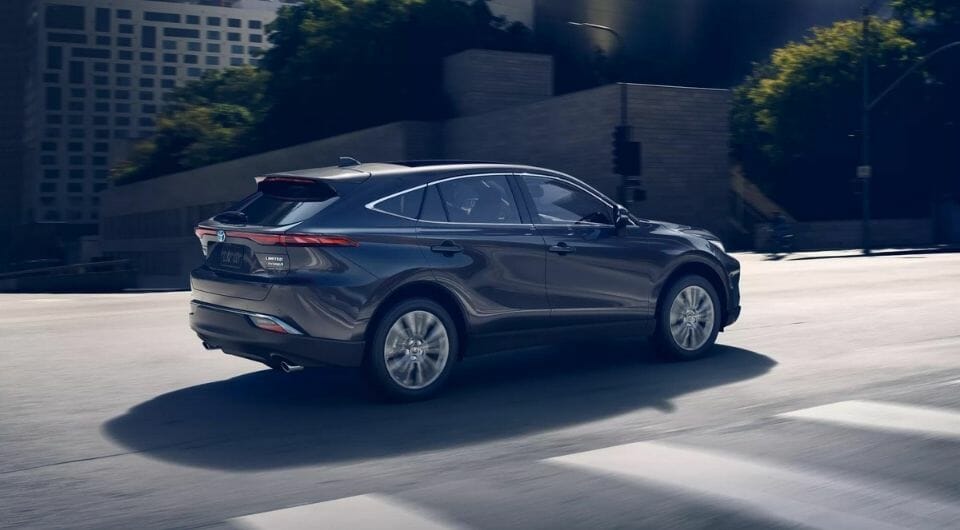 If you’re searching for a practical option in the small SUV market, this 2022 Toyota Venza review will help you find direction. We have evaluated this vehicle from multiple angles– engine, performance, comfort, safety, market price, and more, to give you a full picture.

The Toyota group is known for being quite conservative, especially with the line of its main brand. On the other hand, it also knows that some market tendencies are just too interesting to overlook, especially once the competitors begin to sell well. That is why, after having released a long variety of conventional SUVs, Toyota decided it was time to offer something a little different from them.

The Venza nameplate was brought from the ashes last year. It has abandoned the family-oriented character of the first generation to reincarnate in the model which was originally developed for the Japanese market and was named Harrier. Being so close to the RAV4, which has become a reference in their category makes it easy to find reasons to criticize the Venza, but not all of them are fair.

The newcomer can be seen as a conservative interpretation of the coupé-SUV. The stylish exterior is there, but the roof is not raked enough to compromise the internal space. Another interesting point is that, rather than focusing on performance, the Venza offers a standard hybrid powertrain with standard AWD. The Star Gaze sunroof is an irresistible addition if you can spring for it.

Pros
Handsome external design is modern and resembles some Lexus models.
Hybrid powertrain makes AWD standard and offers impressive fuel efficiency.
Coupé design was not applied to the point of drastically affecting its internal space.
Cons
Buyers seeking practicality will find the Toyota RAV4 a more interesting option.
Entry-level version does not offer a good value, especially among so many competitors.
Upscale version is too expensive despite bringing some surprising optional items.

In Toyota’s portfolio, anyone looking for luxury has an entire Lexus to have fun with. If your taste is sportier, the company wants you to look at anything with the TRD badge. Now, if none of that floats your boat, you will get a bland family car focused on fuel efficiency. If you are satisfied with that starting point, the design-oriented perks offered by Venza are sure to make it a compelling option. But as we mentioned, be ready that nothing groundbreaking is there in the equipment list to sweep you off your feet.

You know when you take an exam and perform just well enough to pass? If you are expecting the 2022 Toyota Venza to be a sportier counterpart to the RAV4, the reality is just like that. Its dynamic behavior is not engaging, it vibrates more than it should, and the only strong suit of the standard hybrid powertrain is its high fuel efficiency.

There is only one option available, and it is a self-charging hybrid. The gasoline engine is a four-cylinder 2.5L and it is paired to three electric motors to generate a combined power of 219 hp and a combined torque of 163 lb-ft. The only transmission available is a CVT.

Compared to the RAV4, the Venza has been considered softer and somewhat more lethargic. While that might suit family-oriented driving, it also makes the car feel larger than it is.

It is not one of the sportiest in its category, despite its design. In fact, its dynamic behavior has been considered decent by the specialized press; the only bright side is that it is balanced at cornering. The Bridgestone Ecopia tires do not help in providing grip.

The previous items anticipate that this car aims at offering smooth and relaxed dynamics. However, it does not execute that so well because the four-cylinder engine transmits more vibration than one would expect to the steering wheel and pedals.

While Toyota invested in visual and entertainment niceties, the performance of all the other aspects of the 2022 Venza is quite average. When it comes to safety, you are going to find everything you’ll expect from modern cars and nothing more. There are no highlights or surprises in this aspect.

This vehicle is equipped with disc brakes on all wheels with an anti-lock braking system (ABS). The specialized press has considered its braking performance unimpressive because of its low lateral grip and moderate distances at a straight line.

Inside the 2022 Toyota Venza, you are going to find the typical suite of electronic safety assists. The features include cruise control, traction and stability controls, lane-keeping and lane-departure assists, blind-spot monitoring and rear cross-traffic alert, and systems for pre-collision and collision mitigation.

This vehicle is equipped with aero-composite LED lights with automatic high beam activation. There are also LEDs on the brake lights and the daytime running lights.

The 2022 Toyota Venza brings electronic controls for traction and stability along with standard all-wheel drive.

You would never expect a stylish and sporty SUV to impress at mileage, right? Well, if that’s what you’re thinking, you’ll be surprised by its great fuel economy. Basically, the company’s proven hybrid powertrain makes a good match with the modern structure and the aerodynamic roofline and delivers quite good consumption numbers.

The only powertrain available for this model is a four-cylinder, 2.5L gasoline engine that uses the Atkinson cycle and reaches 176 hp of power and 163 lb-ft of torque. It is paired to three electric motors: the front one generates 118 hp and 149 lb-ft and the two rear ones are good for 54 hp and 89 lb-ft.

This is where this model shines: EPA estimates it to reach 40 mpg in the city, 37 mpg on the highway, and 39 mpg combined.

Toyota’s conservative decision of applying the coupé-SUV design only in part pays some dividends here. While the style is still attractive, the passenger room has not suffered much compared to that of the RAV4. Design and electronics are pretty much average, but that might have happened on purpose to make you look up: the optional electrochromic panoramic sunroof is simply amazing.

The seat is comfortable, and the room is decent. However, the fact that the Venza is less roomy than the RAV4 while being slightly larger does not seem like a good deal.

While the design is not bad, it fails to impress as well; there are generic shapes playing a supporting role in order to keep your eyes on the 8” touchscreen dedicated to the infotainment system; if you take an upscale trim, you get a 12.3” unit. The latter also enlarges the function list with in-dash navigation and a premium JBL audio system with nine speakers.

The same impression is valid for the other passengers: less space available despite a larger external size. Then again, there are no drastic differences here; most target buyers will still find the Venza adequate. The only issue may be the trunk, which the specialized press has considered too small.

When it comes to the cabin, the biggest highlight is named Star Gaze: an optional electrochromic panoramic sunroof whose glass panels can go from transparent to opaque with the flip of a switch. The Venza is the first Toyota and the first generalist car model in general to bring such a feature.

The 2022 Toyota Venza has an overall height of 65.9 inches and a total volume of 95 ft³ for its passenger area. That space is exclusively divided into two-seat rows for up to five occupants.

If the stylish exterior and the beautiful sunroof are not attractive enough to you, it will be difficult to pay more than the RAV4 to get a smaller cabin and similar features everywhere else. At least you will have a chance to compensate for that investment with the nice fuel efficiency.

The fact that this model comes from Japan takes a toll on its pricing. The 2022 Toyota Venza is available in the following trim levels:

All these trim levels only differ on the equipment list; the upscale Limited stands out for offering more options. But overall, our vote goes to the top trim XLE– it might be expensive for its class, but it’s also the one with the best value.

This model’s powertrain setup uses gasoline and one electric motor to power the front axle while two other electric motors power the rear axle. Therefore, all-wheel drive is a standard feature here.

The limited coverage of three years or 36,000 miles and the powertrain coverage of five years or 60,000 do not stand out in the market. However, the whole plan becomes more interesting when we consider its other features: the hybrid components are covered for eight years or 100,000 miles and there is complimentary scheduled maintenance for two years or 25,000 miles.

If practicality and internal room are priorities to you, spare yourself from criticizing the Venza and take the RAV4. The coupé-ish model is designed for people who appreciate that type of design and do not mind paying extra for it. When you see it like that, the Venza becomes actually interesting.