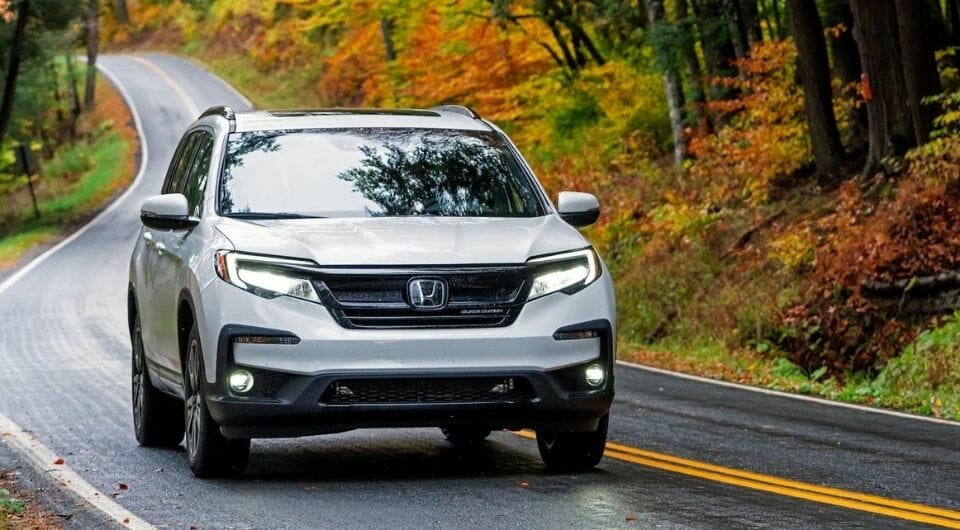 A practical midsize SUV that wants to be a midsize minivan

In this 2022 Honda Pilot Review, we’ll evaluate this minivan-inspired midsize SUV and delve deep into its features, characteristics, and standard offerings, to help you decide whether this is going to be your new purchase.

People who only see how Japanese cars thrive in the USA by getting high sales figures and collecting dozens of press awards may not realize that such a reputation took decades of hard work to be built. Besides the best-sellers we see today, there were also several failed models and others that were designed to be average on purpose because the company needed to be conservative at the time.

When it comes to Honda, the Accord is a representative of the first group, the CrossTour belongs to the second, and the Pilot falls into the third category. In short, the maker wanted to try its chances in the overcrowded SUV segment while having no experience with such vehicles – the few attempts made in the 1990s and the 2000s were mostly badge-engineered SUVs created by other companies.

The 2022 Honda Pilot is conservative because, instead of trying to stand out for its style, item list, or performance, it stays in the shadows ready to snatch any customer who decides to give it a chance. It does that with a competent powertrain, a large cabin, several practical solutions inside, and a list of trim levels for every taste. The more rational you are as a car buyer, the more you will enjoy it.

Pros
The cabin has acres of room and fills them with several family-friendly features.
Base version has enough desirable standard items to be actually worthy of consideration.
Single powertrain option is quite vigorous and delivers interesting fuel-efficiency numbers.
Tall and long windows and thin pillars make the 2022 Pilot’s outward visibility class-leading.
Cons
No options of electrified powertrains or at least downsized engines available for the Pilot.
External design is too discreet for an SUV and too similar to that of a minivan of the 2010s.
Touchscreens are small and make the infotainment central difficult and frustrating to use.
Third seat row may be roomy but is low enough to become uncomfortable during long trips.

As you are going to see below, the 2022 Honda Pilot is the closest you can get to a minivan without actually venturing into the minivan segment. However, it is unfortunate that Honda chose such an old-fashioned minivan image to use as reference: this model combines a roomy cabin and many useful features with an old-fashioned powertrain and an anesthetized ride.

With an old-fashioned V6 engine, conventional automatic transmission, and comfort-oriented ride, the 2022 Honda Pilot could easily pass as a typical North-American SUV of the 2000s – may be even a minivan of that same time. Whether that is a good thing is a completely different matter, though.

The only engine available is a naturally-aspirated 3.5L V6, which generates 280 hp of power and 262 lb-ft of torque. The specialized press has praised its sporty sound.

The only transmission available is a nine-speed automatic with an overdrive function. It has been considered unobtrusive, that is, it does not interfere with the driver’s style.

The 2022 Honda Pilot prioritizes comfort. That can be good at a first glance because it goes smoothly even when loaded with people and cargo but becomes a problem at any attempt of making driving more engaging. After all, the driver ends up with limited control of the body’s movements.

The same focus on comfort causes similar problems here. While the smooth steering makes it easy to maneuver such a large vehicle at low speeds, especially when parking, it also contributes to an unrefined ride in other situations – on the highway, the feeling of little control appears once again.

Average performance in this area. While other Hondas have become known and praised for their big package of electronic items offered as standard, the Pilot leaves many of those to its upscale versions, sometimes at extra cost. That is not a good characteristic for a midsize SUV.

The model uses disc brakes on all wheels. It also features ABS, automated emergency braking, and collision mitigation braking in the standard package.

You will find front and side airbags for the driver and the front passenger, and curtain airbags for the three rows of seats. There is also an occupancy sensor that aims at preventing unnecessary deployments.

This model features LEDs on the headlights and the taillights. The former includes automatic high beams. There are also fog lamps and LED daytime running lights.

Besides the available all-wheel drive, the model includes stability and traction control.

The only engine available is a 3.5L V6 with natural aspiration.

According to the EPA, versions equipped with front-wheel drive make 20 mpg in the city, 27 mpg on the highway, and 23 mpg combined. If you opt for the all-wheel drive, the first two figures drop by 1 mpg.

The only reason why we should not say the 2022 Honda Pilot is a minivan on stilts is that the same manufacturer offers the Odyssey, an actual minivan that takes practicality to a whole new level.

Inside the cabin, everything is designed to be simple and easy to use, with the roomy interior well divided into several storage areas. The midsize SUV offers a gigantic cabin filled with intuitive commands, seven or eight seats, and quirks such as an in-cabin PA system, literally sixteen cupholders (that makes two per occupant), and trim levels with captain’s chairs with an exclusive console.

The driver enjoys a high and commanding position on the elevated driver’s seat, along with roomy headroom and legroom. The big windows and the roof pillars ensure seamless visibility.

The specialized press has complained a lot about the Pilot’s infotainment center over the past few years because it is considered difficult to use. Standard versions use a basic system with a 5” screen while upscale ones move to an 8” screen with most of the latest technologies available.

The standard setting is of three seat rows and eight passengers, but upscale versions change the second-row bench for two captain’s chairs in exchange for taking one passenger less. While the Pilot offers great room for everyone, the third row seats are low enough, and they are appropriate only for kids.

The 2022 Honda Pilot has a total height of 70.6 inches and a passenger volume of 152 ft³. That room is used by up to eight occupants (seven in some versions) divided into three rows of seats.

The base volume is 16.5 ft³. Folding down the third row of seats increases it to 46.8 ft³. Doing the same to the second row of seats reaches the maximum of 83.9 ft³. There is an adjustable cargo floor that can be set to maximize the trunk or create an underfloor storage area.

A good consequence of this model being so conservative is that it is moderately priced. There are trim levels for everyone, from the basic Sport to the upscale Black Edition, but none of them have the slightest hint of emotion; the Trailsport adds exclusive visual bits, but that is not really enough.

The 2022 Honda Pilot is available in the following trim levels:

The Trailsport adds visual accessories which give the Pilot a hint of off-road style. The Black Edition builds on the Elite by painting several trim items in black to get a more sinister look. When it comes to the others, their differences are centered on the equipment list; the Special Edition was designed to be a value-oriented option.

While the standard setup is front-wheel drive, the all-wheel drive system is available in most versions. Trailsport, Elite, and Black Edition have the latter as standard.

Honda’s plans fall precisely on the category’s standard. The limited coverage is of three years or 36,000 miles, the powertrain coverage lasts five years or 60,000 miles, and there is no complimentary scheduled maintenance.

Minivan jokes aside, Honda decided to prioritize practicality on the 2022 Pilot and it delivered, good and bad parts included. While some of its flaws are problematic no matter from which point of view you look, others can actually be considered the price you pay for pursuing a comfortable cabin for many people, some of them children, which is affordable to get and should withstand frequent long drives. This model wants to be a great option for its target audience and nothing else.