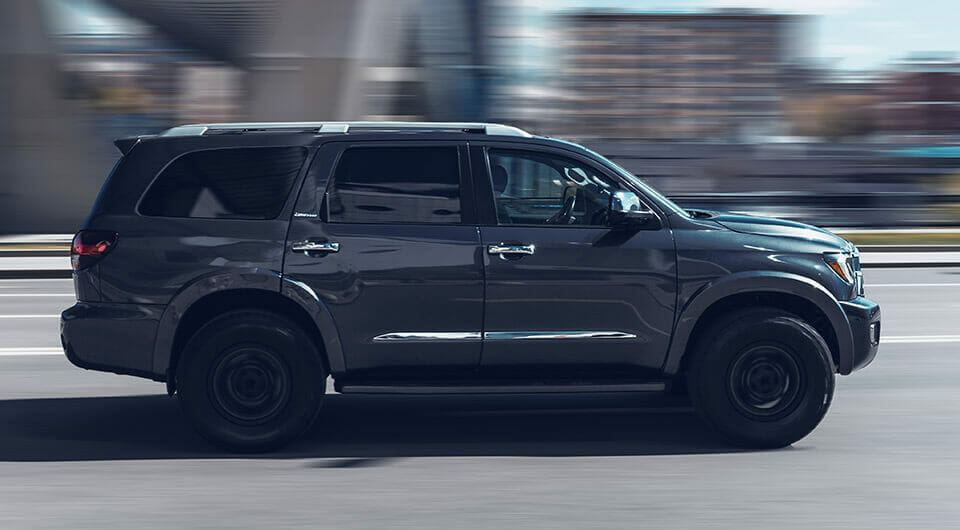 The term “street legal” is a bit of a misnomer; every state has different laws about which vehicles are too big to be on the road. Still, some metal monsters over the years have caused people to gawk and wonder, “Is that even legal?” Though any SUV can be modified to leave an impression, it might be more impressive to see an oversized SUV that came straight off the factory line. Check out the biggest SUVs on the market in 2022.

Luckily, most SUVs aren’t so tall that they don’t clear bridges over the highway. However, don’t take that to mean that they can’t achieve great heights. Many of 2022’s SUVs have proven that they can accomplish that figuratively and literally.

The Toyota Sequoia may not be able to compete with the world’s tallest sequoia tree, which stands at 275 feet. That being said, the Sequoia measures exactly 77 inches tall,  providing it with plenty of competition against other SUV models.

But this model is more than just its height. Offering a hybrid engine, seating for up to 8 people, heated and ventilated front seats (plus a heated steering wheel), and an impressive towing capacity of 7,000 pounds, the Sequoia may seem like it defies the laws of nature.

Although the Cadillac Escalade doesn’t quite escalate itself to the top of the list, its 76.7-inch height brings it pretty close. This luxury SUV can seat up to 7 people in its roomy interior.

And on the drive itself, the Escalade wants you to live the high life, with hands-free cruise control and features like a console refrigerator and heated and ventilated front seats.

General Motors rose to the challenge of building a tall SUV with the 2022 Yukon. While the Yukon falls a touch short of the “Tallest” title, it still reaches an impressive 76.5 inches, giving the Escalade a run for its money.

Providing a comfortable seating arrangement for up to 9 occupants, wireless charging as well as USB charging ports, and an infotainment system, the Yukon’s interior clearly isn’t trying to make up for what it lacks in height because it doesn’t lack there either.

In 2006, the Hummer H1 set the record for the heaviest consumer SUV, with a curb weight of 7,847 pounds. While few SUVs will ever come close to competing with that, some 2022 models hope to tread closely behind.

Cadillac’s Escalade may not have reached great heights, but its sibling (the Escalade ESV) certainly carries a lot of weight. The ESV’s curb weight on the 3-liter four-wheel drive reaches a shocking 6,182 pounds, easily trouncing most of its competitors by at least 100 pounds.

But you don’t need to worry about the Escalade ESV being too heavy to pull its weight. Diesel engines and 460 lb-ft of torque ensure this SUV is capable of pulling its own weight and whatever it might be hauling as well: it can tow up to 7,800 pounds behind it, a good deal more than the Toyota Sequoia.

The hefty Chevrolet Suburban may be a family SUV, but it seems like it’s squaring up to challenge the Escalade ESV for the spot, with the four-wheel drive clocking in at an impressive 6,072 pounds.

Despite its hefty measurements, it still proves to be a comfortable and roomy SUV for you and your passengers. And while the suburbs might not see you towing all that much until moving day, the Suburban will be ready when that happens: some models can tow up to 7,800 pounds.

A crossover SUV like the Nissan Armada may not turn heads, but it can certainly tip the scales. The Nissan Armada Platinum Edition, the most expensive model, has a base curb weight registering at 6,034 pounds.

Prospective buyers can also give weight to its capacity for up to 8 people and 92.6 cubic feet of cargo, its USB charging ports and Bluetooth-compatible infotainment system, or its safety assistance features that are standard across all models.

And though this SUV may not seem like it’s pulling all that much weight on its own, it can pull a trailer’s weight far easier than any of its competitors. All editions of the Armada can tow a maximum of 8,500 pounds, making it an incredibly strong option for towing.

There are some large SUVs out there, but some of them aren’t the longest available by a long shot. On the other hand, once an SUV gets too long, it’s probably better described as a limo than an SUV. These lengthy SUVs are suitable for drivers who hope to transport plenty of cargo or who simply want even a five-minute trip to be a long drive.

Even if Cadillac wasn’t hoping that the Escalade ESV would break records, they must have gone to great lengths to help it land on every list. Measuring 227 inches long, this big SUV can fit 7 people or 142.8 cubic feet of cargo space, whichever you prefer. Though its 16 MPG combined fuel efficiency makes it clear it’s not really built for longer trips, its plush interior and amenities hope to make your travels as comfortable as possible.

It’s a stretch to say that the Chevy Suburban is the longest available SUV, but it’s pretty close. 225.7 inches of SUV means you have room inside for 9 people and 144.7 cubic feet of cargo space.

Powered by diesel engines and equipped with plenty of driver assistance features (like automatic braking and lane-keep assist), the Suburban likely isn’t quite the SUV that you’d picture in the suburbs, but it’s not at all difficult to picture it as one of the larger SUVs of the year.

Make lengthy expeditions in the lengthy Ford Expedition, an SUV stretching out to 221.9 inches long. It’s built for longer trips, providing a spacious interior for up to 8 people and 104.6 cubic feet of cargo.

It has a four-wheel drive, an interior infotainment system, a panoramic sunroof, and automated safety features such as braking. It may not be at the top of a relatively short list, but as long as all its occupants are happy, there’s a good chance it doesn’t need to.

Size Up Your Next SUV with SUViews

Even if you’d like a bigger SUV, you probably don’t need its size to rival the largest SUVs available. SUViews offers all the advice you’ll need to decide the SUV that’s appropriately sized for you, whether you need an overview of the latest model or tips on SUV selection in general. When you dream of your next SUV, don’t be afraid to dream big.